Posts by delegates from the 11th EACPT Congress in Geneva

Around 600 young and senior delegates from 5 continents were in Geneva at
the end of August, for the 11th biennial Congress of the European Association for Clinical Pharmacology and Therapeutics (EACPT).


See below blogs by international delegates on sessions at the 2013 EACPT Congress in Geneva. 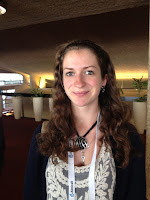 Professor Gunther Hartmann on Oligonucleotide-based Immunotherapy: On the first evening of the 11th EACPT congress in Geneva, Professor Hartmann (Head of the BONFOR research committee at the University of Bonn) introduced congress participants to the world of oligonucleotide-based immunotherapy.
In simple terms, oligonucleotides are short, single-stranded nucleic acid (DNA/RNA) molecules. These synthetic molecules are synthesized to interact specifically, depending on their nucleotide sequence, with complementary nucleotide sequences found in the body.


Antiviral defence in humans relies heavily on the detection of the nucleic acids of invading viruses by Toll-like receptors (TLRs) and retinoic acid-inducible gene I (RIG-I)-like receptors (RLRs). Having worked in the field of oligonucleotides since 1995, Gunther Hartman’s research has focused on the immunorecognition of synthetic nucleic acids.


In particular, the group discovered that short interfering RNA molecules (siRNAs) are recognised by TLRs in the human immune system. The activation of TLR7 was shown to activate the pathway for production of interleukin 1 beta, initiating an immune response.

The group’s research then focused on the understanding of RLR mechanisms, these receptors being found in the cytoplasm of all human cells. Two RLRs (RIG-I and MDA-5) induce an innate immune response when stimulated by pathogenic RNA. In this way, a synthetic oligonucleotide to activate such a receptor could serve to stimulate an inactive or deficient immune system, or possibly even as a vaccine to protect against a particularly virulent virus.

Professor Hartmann’s group worked to characterise the signalling pathways and the structure of the binding pocket of the antiviral cytosolic RIG-I, involved in innate response to the influenza virus. This led to the development of an oligonucleotide mimic of the identified 5’-triphosphate RNA ligand.

This mimic (CpG) is currently undergoing clinical trials. Interestingly, activation of RIG-I and MDA-5 also caused apoptosis (programmed cell death) in animal tumour models (in melanoma cells). This apoptosis was not seen in non-tumour cells, suggesting a use in anti-cancer therapy.

Professor Hartmann’s lecture showed us that current research in oligonucleotide-based immunotherapy and even cancer therapy could still only be just scratching the surface of further possible applications.