Updates from the European Medicines Agency: from vaccines to repurposing medicines and pharmacovigilance 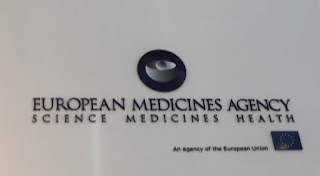 24th-25th September
The European  Medicines Agency has hosted its first meetings in Amsterdam  for its Healthcare Professional Working Party and Patient and Consumers Working Party since the move of the Agency from its former Canary Wharf headquarters in London. The sessions coincided with the launch of a further three year work programme agreed between the EMA and its working parties.


Papers from the meetings will be available on the EMA website.

De la Mata noted that vaccine coverage is below 95% in many EU member states. A 2019 Eurobarometer on vaccine confidence had highlighted several key points of misinformation, for example with 48% of respondents thinking that vaccines often produce serious side effects, 38% that vaccines can cause the disease they prevent and 55% considering that vaccines overload and weaken the immune system.

A Global Vaccination Summit had been held on 12th September with around 400 delegates political, technical, patients and other - and with WHO collaboration. This led to a 10 point document including new focus on reliable access to vaccines, safety and transparent, clear, independent information.

European level actions are to include a new European Vaccination portal coordinated by ECDC (European Centre for Disease Control) with support from the EMA (EVIS - European Vaccine Information Sharing). Other work will consider dissemination of vaccine schedules, focus on the supply chain, including mitigating shortages and identifying and overcoming barriers to access.

A new coalition of healthcare workers for vaccination, launched on 5th March in Brussels, aims to address and reverse reasons for outbreaks of measles and other vaccine-preventable infections in health workers as recently as 2017 and 2018, with transmission in the healthcare setting even in countries with high vaccination coverage.

John Kinsman, Expert in Social and Behavioural Change Communication at the ECDC, outlined Development of the European Vaccination information Portal. This is due to be piloted in December 2019 and launched in April 2020 during European Immunisation week.


The portal has a legal basis, arising from a 2016 European Commission call for the ECDC to work with EMA to develop the portal.  Issues include the reality that the majority of the public do not have a scientific background and making sure through content, language and accessibility that the portal is as widely available as possible.

The EMA is seeing an exponential increase in reporting by patients of suspected adverse drug reactions.  A pressing aim of the EMA is how best to learn from patient reporting of possible ADR. This will benefit from previous experience of patient reporting to national competent authorities  (e.g. US FDA and UK MHRA [patient reporting since September 2005]) and international agencies (e.g. the WHO Uppsala Monitoring Centre).

Plans for future meetings include proposals for further discussion of initiatives on vaccine uptake.
Posted by EACPT updates at 06:03