Today in Geneva, EACPT Lifetime Achievement Awards were presented to Professor Carlo Patrono and to Professor Sir Michael Rawlins for their outstanding contributions to the national and international benefits of clinical pharmacology for medicine, health care and patient safety.


These Awards, including the EACPT silver medal, were presented at an Awards Ceremony the 11th EACPT Congress in Geneva, 28th - 31st August 2013 by EACPT co-founder Professor Folke Sjöqvist, and by Dr Marie Besson, co-leader of the 2011 EACPT Congress.


Carlo Patrono is Professor and Chair of the Department of Pharmacology at the Catholic University School of Medicine (UCSC) in Rome, Italy.  He is also the Chairman of the Task Force on Antiplatelet Agents of the European Society of Cardiology. 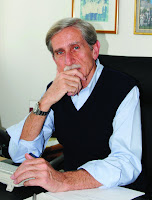 Prof. Patrono’s main research interest is in the study of platelet activation and inhibition in atherothrombosis. He pioneered development of radioimmunoassays for measuring prostanoid and isoprostane biosynthesis in health and disease. His research has characterized the human pharmacology of aspirin as an inhibitor of platelet COX-1 and provided the basis for the development of low-dose aspirin as an antithrombotic agent. During the past decade Prof. Patrono has contributed to characterizing the human pharmacology of COX-2 inhibitors and evaluating their cardiovascular effects in different clinical settings.
For development of low-dose aspirin for the prevention of cardiovascular disease, Professor Patrono was joint recipient with Garret FitzGerald in April 2013 from the Institut de France of the 500,000 euro 2013 Grand Prix Scientifique, the world’s most prestigious prize for cardiovascular research.
He has also received the Alexander B. Gutman award from the Mount Sinai School of Medicine, the Distinguished Award in Neuroscience from the Louisiana State University, the 1998 International Aspirin® Award from Bayer AG, the 2007 John Vane Award from the William Harvey Research Institute of the University of London, and the 2011 Outstanding Achievement Award of the Eicosanoid Research Foundation.


Michael Rawlins was from 1999-2013 the first chairman of the National Institute for Health and Clinical Excellence (NICE), and from 1998-2008, Chairman of the Advisory Council on the Misuse of Drugs. He was also Professor of Clinical Pharmacology at the University of Newcastle upon Tyne from 1973 – 2006) and from 1992-1998 Chairman of the UK Committee on the Safety of Medicines, which advised UK government ministers on marketing authorization for new pharmaceuticals, and on withdrawal of medicines in the event of safety concerns. He is currently President of the Royal Society of Medicine and Chairman of the UK Biobank.
As Chairman of NICE, he led one of the world’s most important healthcare organizations, which, based on clinical and cost-effectiveness, guides the National Health Service on whether medicines and other health technologies should be available to patients, and develops evidence-based clinical guidelines for health professionals. Many countries have studied the work of NICE and adopted its ideas and innovations.
Sir Michael’s outstanding scientific contributions have been recognised by the award of numerous honours and distinctions, including his appointment as Knight Bachelor in 1999 for “services to the improvement of patient protection from the side effects of medicinal drugs”.


The EACPT was founded 20 years ago and now includes all national organisations for clinical pharmacology in Europe. The EACPT aims to provide educational and scientific support for the more than 4000 individual professionals interested in clinical pharmacology and therapeutics throughout the European region, with its congresses attended by a global audience. The EACPT also advises policy makers on how the specialty can contribute to human health and wealth. 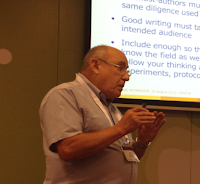 At 8am a well-attended session at the CICG in Geneva on how to publish scientific work - over 60 delegates here for a Masterclass by EACPT official journal editor Richard Shader, day 2 of the 11th EACPT Congress 28-31 August.
Some deceptively simple messages including
- work back from key results
- decide title and write abstract last
- write clearly
- avoid excessive use of adverbs
- use short sentences
- consider use of translation support if English is not your first language [This should be translation of your own text, NOT ghost writing]
- explain why you undertook the work
- describe how you advanced knowledge in the field.
- note further work that would take the field forward.

The European Association of Clinical Pharmacology and Therapeutics has  Clinical Therapeutics as its Official Journal, in partnership with the major international publisher Elsevier.

The journal since April 2013 features highlights of EACPT scientific and other activities and provides information on future EACPT congresses, summer schools and other events. The journal will also publish peer-reviewed original papers and reviews arising from EACPT conferences. Editor-in-Chief of ClinicalTherapeutics Dr. Richard Shader welcomed the agreement reached with European Association of Clinical Pharmacology and Therapeutics (EACPT) to adopt Clinical Therapeutics as its Official Journal.
He said “This interaction is timely both in view of the increasing need to meet international therapeutic challenges and the renewed editorial calendar to broaden the journal's scope to include the pharmacology underpinning successful therapeutics”.

See more about the new affiliation between EACPT and Clinical Therapeutics
Posted by EACPT updates at 00:00 No comments:

Around 600 young and senior pharmacologists from 5 continents are now in Geneva for the 11th biennial Congress of the European Association for Clinical Pharmacology and Therapeutics (EACPT). 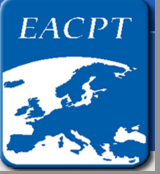 More about the 11th EACPT Congress in Geneva.
View and download Congress Programme
View Congress Abstracts ONLINE at the Clinical Therapeutics website
The Geneva Congress brings together a wide range of international delegates, including health professionals, clinical and life scientists, policy makers, professionals from the biotechnology and pharmaceutical communities and others interested in the spectrum from basic to clinical pharmacology and pharmacotherapy, and from drug discovery to regulatory affairs. For the Geneva Congress, there are 101 invited speakers from 21 countries - 15 from the European region and a further 6 countries internationally, from the USA, Canada, New Zealand, China, Benin and India. Around 400 abstracts from 57 countries from all 5 continents are being presented as oral and poster communications.
The EACPT was founded 20 years ago and now includes all national organisations for clinical pharmacology in Europe. The EACPT aims to provide educational and scientific support for the more than 4000 individual professionals interested in clinical pharmacology and therapeutics throughout the European region, with its congresses attended by a global audience. The EACPT also advises policy makers on how the specialty can contribute to human health and wealth.

More about the 11th EACPT Congress in Geneva.

Posted by EACPT updates at 03:35 No comments: